First snow of the season with my new GPS 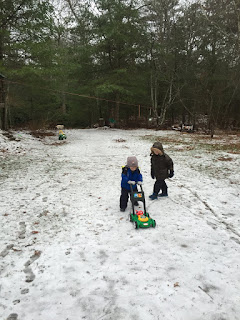 Mark the calendar...December 29, 2015 is the first accumulating snow of the 2015-16 winter season here in Sandwich.  I estimate from the windshield of my car this morning that we got about 3/4 of an inch of snow...followed by continuous rain that is still pouring down at noon.  Most of the snow is gone and what is left is slush.  In fact it's been slush since at least 7 am but that didn't stop the boys from running outside as soon as they woke up to go play in it!

I myself am eager to go out and play in it.  I got a present...a new wireless universal GPS receiver!  I am excited to go outside and set up a sampling campaign to measure snow fall.  This first snow is a race against time.  The longer it takes me to set it up the less snow there is left in the yard!  But it will be fun is to use these same sampling locations to measure snowfall totals throughout the season.

Last year we had the biggest and best snow winter that Cape Cod has ever seen (or at least that anyone I talked to has ever seen on the Cape).  I tried to write down snow totals and to take lots of pictures of how high the drifts were or how big the snowplow mountain was after each new snow.  But basically we have NO DATA for the snowiest winter on record; Boston set its all-time snowiest winter record with 110.6 inches!  This year there are mixed predictions.  Some say that it will be even snowier than last year due to El Nino.  Others say that it will be too warm to see much accumulating snow.  Only time (and my diligent sampling of snowfall) will tell.  Here is an article from the Boston Globe with other amateur forecasts Could this be the beginning of another bad winter?  The Globe and I obviously have opposite opinions of what kind of winter is bad or good.  For the purposes of this blog remember that MORE snow = BETTER winter!

I am waiting for the GPS to charge.  While I wait the snow keeps melting sped on by driving rain to the point that there is not much left to measure.  But one great part about myObservatory is that I can still see the changes in pictures.  Here are some images from noon.

All that is left is the slush pile of snow that came off the shed roof and a skim of slush on the porch (and a very muddy white dog who is enjoying himself in the downpours!)  There are spots of snow/slush in the woods that seem protected from the worst pelting of the rain.  And there are giant puddles all over the driveway and yard. 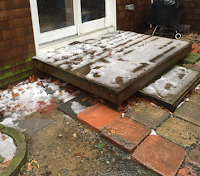 Since I have some time to wait for my new toy I've been putting some more thought into my sampling campaign.  I have decided to do two different sampling campaigns for each snowfall...one will be randomly generated by the sampling campaign feature of myObservatory; the other will consist of specific points that I think will give a good average snowfall for the yard.  Over the past three years living in this house I have watched how the snow drifts around the yard; where it seems to lay in heavy or light; where it seems least touched by dogs and children; where it seems averaged by the expanse of the yard around it.  This is the information that I will use to decide where my non-random samples will be taken.

Update:  Now it is 3 pm.  The GPS has charged!  And...there is hardly any snow left in the yard.  But I refuse to let this stop my good fun.  I set up a new station in the 'Our house' dataset called Snowfall.  I moved my photos from earlier today into the new station.  I am now using the freeform sampling feature in the myObservatory app to take estimated snow depths and photos of any snow left on the property.  In addition to this sampling I will be setting up my regular sampling campaigns so that when the snow flies again I will be ready.  Bring it on Cape Cod winter...The Cape Condons are ready!

Posted by Unknown at 3:38 PM No comments:

One of the projects that I am working on is a collaborative effort with the Sandwich STEM Academy and the Sandwich Department of Natural Resources.  One goal of the project is to set up an outdoor classroom space at Scorton's Creek in East Sandwich.  The first phase of this project is to collect data with students about water quality.  This data will be used in an application to Massachusetts Marine Fisheries Division to petition for shellfish restoration.  The end goal is to establish a population of oysters within the Scorton's Creek waterway that can be open to recreational shellfishing.  This oyster population will most likely make a huge impact on water quality as well, by the removal of nitrogen from the ecosystem (in biomass consumed by oyster eaters) and the transformation or deposition of nitrogen to a more biologically usable form in fecal pellets.  (The relationship between oysters and nitrogen removal is being studied by local scientists and graduate students at UMass Dartmouth.)

We want to use students to prove that the waterway is suitable for introducing oysters AND that oysters do aid in the removal of nitrogen.  myObservatory is poised to help students collect data and to help decision makers and students analyze that data.  Stay tuned for many more updates on the Scorton's Creek Project.

Here is a blog being written by the AmeriCorps volunteer, Amber, who is placed with the Sandwich Department of Natural Resources.  I look forward to following her blog throughout this process!

Sounds Shell-fishy to Me by Amber Rosa
Posted by KtC at 11:38 AM No comments:

When I first started experimenting with myObservatory I wanted to choose something close to home.  So I picked my yard!  Over the past year I have been collecting GPS tagged photos with the myObservatory iPhone app.  This past early summer we suffered an infestation of caterpillars...three different species over the span of two months.  Every day we worked to save our favorite trees by spraying down and squishing caterpillars (an endlessly fun project for the boys).  Even with these efforts nearly every leaf on our property was consumed.

I tracked defoliation and caterpillar populations with photos.  These photos were automatically geotagged and available on the desktop myObservatory map view.  Here is an example of what the desktop view looks like. 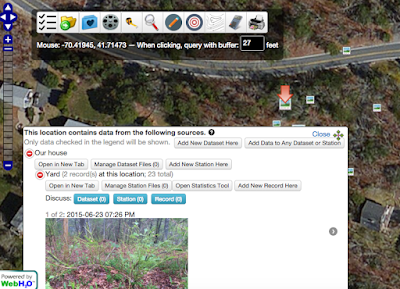 You can see that each photo is saved by location on the map.  When you click on the photo icon the data viewer window pops up and gives the options to open the data in a new window, to add new data or to preview the data.  The photo previewed in this screenshot was taken on June 23rd and shows the defoliation of the wisteria wall that borders our yard.

Below is a photo taken near the same place on May 19th.  Aside from the mini athletes playing whiffle ball in the foreground you can see all of the wisteria blossoms and the early foliage.  In case you don't have any nearby to watch, wisteria starts blooming in the spring and the leaves come in as the blooms start to fade in color and fall off. My husband has been weaving the vines into a privacy screen for the last three years.  Over time the wall has more than tripled in size and the number of flower clusters has increased dramatically. 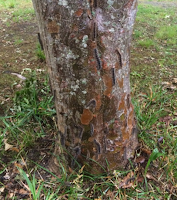 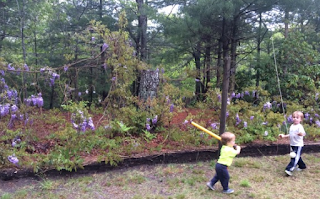 Then this year the caterpillars consumed every leaf and blossom from every vine!  We assumed that this would be the end of the wisteria.  But to our surprise (and relief) it came back.  And more than that it bloomed a second time in places.  Having myObservatory allows me to quickly catalogue photos of the observations I make while I am making them.

In writing this blog post I realized that I never took a photo of the "re-foliated" wisteria!  So I went back through my photos on my phone and found one from October 3rd.  Look at the lush dense leaves!  Now I get to add it as a new record in the station Yard for future reference (when I have long forgotten our plight with the caterpillars). 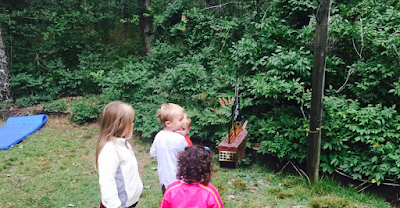